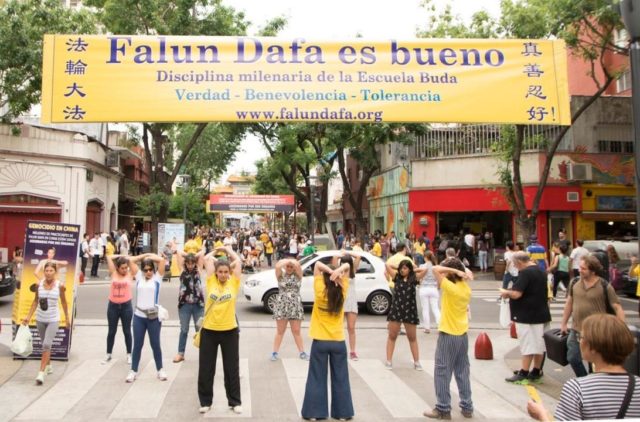 An activity in Chinatown in Buenos Aires to raise awareness about the persecution of Falun Gong in China.

In early April, individuals believed to be working on behalf of the Chinese government tried to pay several media outlets in Argentina to publish an article that sought to take advantage of the novel coronavirus pandemic to spread propaganda vilifying Falun Gong.

The Chinese agent approached a broker who then contacted editors from at least three newspapers or websites, offering 20,000 pesos (approximately $310) should they run the article. One of the editors then contacted a journalist at another news outlet who he knew practiced Falun Gong and that person helped expose the incident.

The Falun Dafa Information Center learned of the attempt from local Falun Gong practitioners and obtained a copy of the article.

The article whose placement was sought was written in poor Spanish and cited various demonizing labels and distortions commonly used in Chinese Communist Party propaganda to vilify Falun Gong and try to justify the regime’s more than 20-year campaign of brutal persecution against the spiritual practice. For example, it claimed falsely that Falun Gong practitioners are not allowed to visit doctors and suggested adherents would not seek treatment for the coronavirus if needed, implying that they could endanger the wider Argentinian public.

“The article misreported Falun Gong’s teachings in an attempt to incite hatred and discrimination against Argentinians who are peacefully practicing their faith,” said Erping Zhang, a spokesman for the Falun Dafa Information Center. ‘This type of misinformation is in line with the pattern of hate propaganda the Chinese regime has spread about Falun Gong within and outside China since the persecution began. Trying to pay local news outlets to print it is the latest scheme in the Communist Party’s bag of dirty tricks.”

To date, no Argentinian news outlets have published the defamatory piece. On April 12, The Epoch Times, however, published an article revealing the incident.